To complete the VEW project, this website documents the whole working of the final product. You can download the documentation to for full information of the project.

www.charlottevogel.com/vew.html
Posted by Charlotte at 20:10 No comments:

30 second clip summarising my final project without giving too much away.
Posted by Charlotte at 13:02 No comments:

Finally I am ready to piece together the footage and compile animated instructions.
I started by making a two min test in time for the group presentation on 16 July. I used this opportunity to test it with the other group members. Without being given any instructions other than "Do what the screen tells you to", I watched them follow the instructions. It was very interesting. Overall, they were all moving the correct limbs at the correct time. They did not seem to be putting much effort into it, but this was probably due to the class room context and fact they were unprepared for a micro workout! Afterward I gathered the feedback, which was varied.
* One person commented they only followed the text, whilst another person commented they only followed the figure. As there is a variation in learning techniques between individuals (some thrive from audio, some visual with language, some visual with image) this makes a huge benefit to my class that it is accessible to all types.
* One conclusion was that the current instruction text was too small and too thin. If the screen was bigger I would expect participants to stand further back, and even for more to join the class... in which case the text is still too small. So I agree it needs to be bigger and bolder.
* I noticed the projector was not very bright. The illuminated text did not show up amazingly, the white text filled in a little, and the purple seemed to merge with the pink slightly. I will need to be testing this on different platforms (LCD screen and projector) to make sure I have optimum settings for the output.
* Another problem from the projector was that the progress marker was barely visible. This was a big difference to how it looked on screen, but I will make it more distinguishable.
Posted by Charlotte at 21:22 No comments: 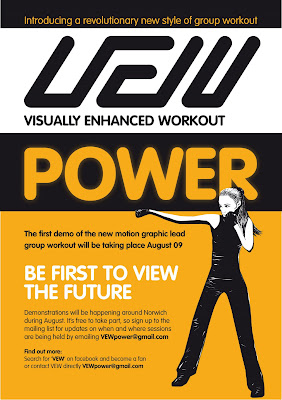 This is the first release of my logo and graphics of my piece. The aim of this is purely to ensure I get a good audience for the testing, as this is crucial to the evaluation of the project.
I also set up a 'VEW' email. This will be useful for correspondence with participants concerning promotion and feedback.
Posted by Charlotte at 15:59 No comments:

VEW on Facebook
Posted by Charlotte at 18:51 No comments:

After two months and many hours of tedious point-tweaking, I have almost completed the whole of the first track. There are still a few rough cuts, but this test was to check that it all fits, and to see if I would have any problems with timing. Luckily I am very pleased with how it is coming together.

Posted by Charlotte at 23:40 No comments:


Uh-oh. Too many fitness systems on the market. And they all claim to be the 'best' way to achieve results.
Fortunately I've stumbles across Zumba, and bless this day as it may well change my life, as it literally promises miracles. It obviously works though, there is photographic evidence of case studies to 'prove' the product works (and this could be me in just a few weeks!); it's got secret fat-melting routines and a 3-zone targeting technique, I WILL get those flat abs I always wanted but never thought I'd have, all with the help of the gorgeous hunk Mr. Bento, who wants to 'spice up my body' (ick!) And look at those rattle toning sticks - ooh and they are FREE! What a fantastic offer. And they are SO confident in their product that if miracles don't occur and I don't lose a whole jean size I can have my money back (less p&p).

This product throws itself at the key trigger areas of it's target audience: results, ease of access, motivation, finance.
• Case study evidence
• Easily accessable - 'fun and easy to learn'
• Bright, colourful, lively and friendly
• Beautiful people – subliminal message being that you will become more like them if you join in their activities
• Offers of free gizmos and money-back guarantee

For the full horror, visit www.zumbafitness.co.uk

Posted by Charlotte at 10:34 No comments: 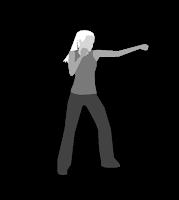 After completion of filming and compiling edited footage into a working track, animation has begun on image sequences of each section.

Animation is moving at a painstakingly slow pace. A 30 second clip took me 4 days to complete. Each sequence is considerably shorter - maybe 8 seconds each, which are repeated as many as 12 times in a track. However, there are 19 unique movements, so this should make less work. But because you do not naturally return to a set position between sequences, there is the problem of matching up the movements with the movement that came before... thus creating extra twiddling work in between.
Posted by Charlotte at 14:12 No comments:

To test the technique of rotoscoping my movements, I made a quick 1.5sec demo. I am pleased with the production method and the result and am confident I can use this to good effect in my project.

Posted by Charlotte at 17:46 No comments:

This widget appears on the Les Mills website and can be embedded around social networking sites such as Facebook to promote and generate interest in their campaign..
Posted by Charlotte at 18:02 No comments:

This project is now complete.

The VEW work was finished and tested in August 2009 and finalised with a documentation exhibition at Norwich University College of the Arts for the MA graduates. I was awarded Master of Digital Arts with distinction.

Since then project has been entered into the :output competition of 2010. I also received positive feedback from Rachael Cohen, program director of Les Mills 'Body Combat'.